Here is the ebook Understanding Quantum technologies 2021! A free 836 pages in-depth book provided in digital format (PDF). Yes, you got it right. It is not a joke. I will explain why.

Is it yet another ebook on quantum physics or quantum computing? Well, I hope not! It fills a lot of gaps found in the current literature. This ebook has been in the making for over three years now. It’s the fourth edition of an ebook initially published in French in three previous versions and now, for the first time, in English. Precisely, in American English, with flavors and colors instead of flavours and colours!

This ebook is a side-product of an adventure started back in 2018 with my friend Fanny Bouton, who now works at OVHcloud with its startups ecosystem, including quantum ones. In 2017, we then decided to produce a didactic conference on quantum computing. It was played in Nantes in June 2018. I followed with a series of 18 posts on my blog to create kinds of lecture notes of this conference. It became an ebook and three years later, here we are with an extended and updated edition in English. This was also the result of being embedded in the quantum ecosystem, meeting with tens of scientists and entrepreneurs, and progressively, with an international outreach.

This ebook is provided for free as is as a PDF file, with an optional lighter version for a readers like Amazon Kindle. But sorry, no epub format! One thing you will probably appreciate is that no email or identity is asked for downloading this ebook! It is then fully GDPR compliant by design! 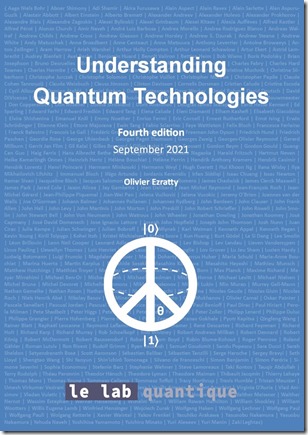 Since October 6th, the book is also available as a paperback edition on most Amazon market places throughout the world, and in two volumes (Amazon.com, Amazon.de, Amazon.fr, Amazon.es, Amazon.it and Amazon.com.au, .co.uk should be available later).

This ebook is also a living animal. I constantly update it with corrections as they come. It contains an updates log at its end. So, download the ebook only when you start reading it, to make sure you have the last update. In quantum physics and computing parlance, it means doing a measurement at the end of processing, not before the end of processing.

I started as a software engineer and learned marketing at Microsoft between 1990 and 2005. Since then, I went progressively back to science and technology, covering as a freelance consultant and writer various topics such as entrepreneurship, consumer electronics, semiconductors and artificial intelligence. Quantum computing had a profound impact on my work balance, pushing me back in the direction of science. It is highly rejuvenating to learn or relearn quantum physics, linear algebra and other sciences and to meet the best in these fields. It is also much better than Sudoku to train your brain as it ages.

So, mixing science, technology and differentiation, this ebook is unique for many reasons:

Let’s say that comprehensiveness is not that bad in this book!

And if you are eager to forge an opinion on quantum supremacy, advantage and where we really are now with quantum computing, go page 232 (quantum uncertainty, pessimists and optimists, challenges) and page 545 (benchmarking, supremacy and advantage).

This ebook target audience is broad and obviously, I will not decide who can or cannot read it. Some parts are accessible to non-scientific readers, particularly the geopolitics and societal parts at its end. Other parts require some scientific background.

The first target audience are computer science specialists and software developers who want to understand the whereabouts of quantum computing hardware, software and use cases. It is also made for students and active professionals who are attracted by quantum technologies and would like to know where they could develop some skills and shape their new job or even businesses. At last, it is also interesting for many quantum researchers, engineers and entrepreneurs since most of them are specialized in a narrow field while this ebook provides an up to date 360° view on all quantum technologies, from science to industry vendors.

The book contains over 293K words, a bit more than the largest Harry Potter book “Harry Potter and the Order of the Phoenix” (257K words). But with more charts, pictures and magic :)! As a reader wrote me, it’s an UFO in the quantum space.

You may wonder why this ebook is free and what is its business model. I have published tens of ebooks like this since 2006 and fared well so far. I favor distribution over revenue. It makes knowledge easily accessible to broad audiences, particularly with students. Also, being distributed in digital format, such ebooks are easy to correct and update. It is quite practical when you mention a lot of people and organizations and deal with complicated scientific matters. Afterwards, I sell my time in a rather traditional way with speaking and consulting missions. So, besides a very few exceptions, you’re not the product

Another way to describe my business model is I give away the long version and sell the short one. Since with businesses, time is money and students have time but no money, all things go round.

Covering quantum technologies as broadly as this ebook does is impossible to do being alone. I fortunately got the help of many scientists and entrepreneurs. They proofread the document, most of the time for the parts corresponding to their specialty. Others less specialized readers proofread the whole document. I managed to have a good, although not complete, coverage of its critical scientific parts. The previous French editions were also fact-checked by many specialists. All in all, since perfection is not possible, I continuously correct the document on the fly.

You can still provide me with feedback and corrections. I update the ebook whenever required. That’s the advantage of publishing a book in electronic format, including printing on demand.